F is for Finger Food

Today in my A to Z trip through December, we are on F! To check out the earlier posts, click here!

Every host and hostess needs a few really easy but pretty things to serve, right? My thing is appetizers - I love making appetizers!

My friend Sharon made this recipe a few years ago - thank you, Sharon! - and I've been dying to try it ever since. I finally got the chance a few weeks ago.  (I'm not sure where she found the idea or I would try to reference it.)

I don't know if there is a proper name for this, but it appears they may be a variation of Tipsy Tomatoes. (Truth be told, I hadn't heard of Tipsy Tomatoes before, but I've just googled it and, well, I can see my experimentation with tomatoes and alcohol has just begun!) 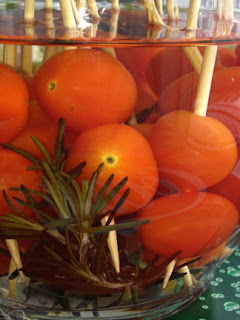 You'll need: 1 bottle of gin (not the cheap stuff), 1 container of fresh tomatoes (little ones, like cherry or grape), 1 sprig of rosemary (optional), a package of wooden skewers and a clear pitcher.

Pour the gin into the pitcher. Skewer a couple of tomatoes on the end of the stick. Throw them and the rosemary into the gin.  Let them sit for a few hours.  (Warning: as I mentioned in August, beware of eating too many - it may tiptoe into yukaflux territory.)

Doesn't it look nice and festive?

While you are here, scroll down a little and you'll see a Rafflecopter contest! I'm giving away a $25 Amazon Gift Card - so you should enter and maybe you'll win it! :) The winner will be announced on December 20th!

Do you have a favorite quick recipe?

Sounds great! One of my favourites is cherries in vodka - similar colours!

Yum! Vodka and cherries? Sounds yummy! And now I have another recipe to experiment with!