Today I'm excited to welcome Jessica L. Jackson to my blog! She's here to share Five Fun Facts about herself, her book and her writing! And, if you scroll down, you can read an intriguing excerpt of her brand new book, Julian's Chance.

FUN FACT #2: About Julian's Chance
My heroine is an angel--however, not your usual type. She's been reborn as a human and only recalls that she is an angel when it is time for her mission to start. 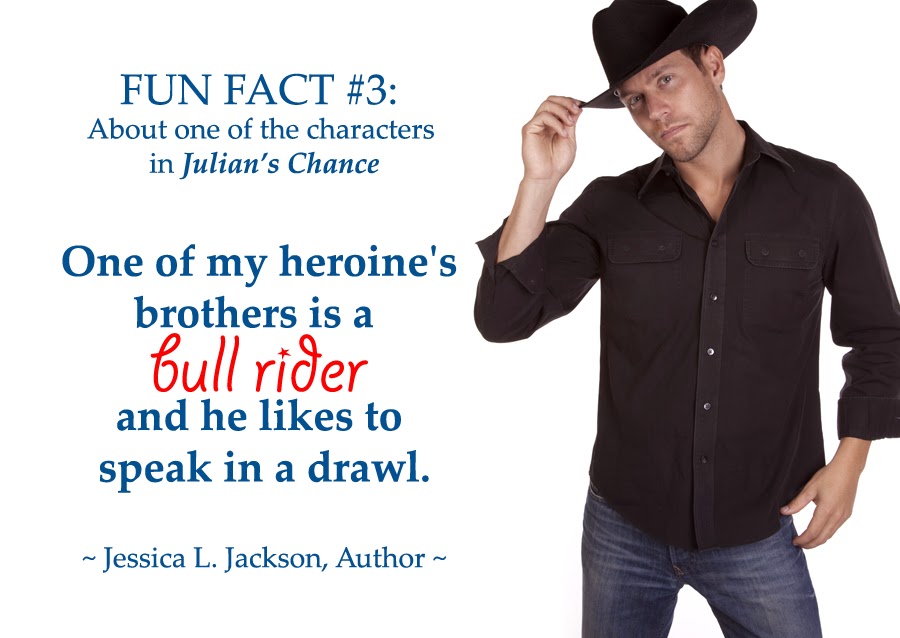 FUN FACT #4: About Jessica's Writing Process
I prefer to write without an outline. I have a rough idea of where I am going with it but after that, I let the characters take over. In my last book, for example, I have some trolls (it's a magical book) and instead of being nasty, obnoxious things, they are very polite, kind of like the gophers in the old Warner Bros. cartoons. They're funny. I didn't start out thinking they were going to be funny, but they are.

FUN FACT #5: About Jessica's next book
My next book is the third in my Look Behind You series--a paranormal contemporary. The heroine goes by only single name. Delphinia. No last name. She's a retired model and her "family" talent has developed a new angle. No spoilers.


“I’m telling you straight out now, honey, that I’m the most selfish bastard you will ever know.”

Gabriella is returning to Earth with a new assignment. She’s to help Julian Gath learn how to love. She’ll be reborn as a mortal and only come into the knowledge of who she is—an angel—on her twenty-fifth birthday. When she completes her mission, she will return to Heaven. That is the way of things for angels for she proved her worthiness many lifetimes before. This is Julian’s chance to prove his.

But, the moment her eyes are open, she knows that this mission is different for her. The love she feels for this powerful, compelling man goes far beyond the charitable love she usually has for her charges. He makes her yearn for life…

Julian Gath wants Gabriella. To him, she radiates something pure and good. He has to have her—to feel as if all that goodness is working in his favor. Something in his life has to be right and good. No matter what it takes, he will win her for his own. He will not love her, however, because love is a weak, useless emotion that does not last. She will be the one bright star shining in his shadowy world…

Most have just one opportunity to don mortal bodies, to determine what this strange new life could teach them. Some noble and valiant spirits return again and again, living only until some important point has adjusted in the favor of the Father, stealing away an advantage from the lost spirits whose sole goal is to destroy every mortal’s chance at eternal joy.

A soft cough sounded and Gabriella looked up from her studies of the intricate DNA combinations necessary to create an earthworm. Her supervisor smiled and bustled into her chamber.

“How are the studies going, hmm?”

Gabriella leaned back to allow Marta to look at her work. A soft sigh escaped her lips before she could contain it. With Marta here, clearly another assignment awaited. Not that she minded, precisely, but she felt herself to be at the brink of a true understanding of DNA. The knowledge hovered just out of her reach, teasing her. Perhaps, after this assignment, she would be able to easily take hold of the figurative brass ring, for with each rebirth, life, and death, came greater clarity of understanding.

“Almost there, almost there.” Marta patted Gabriella’s slender arm and settled her plump self into a nearby chair. Her brown eyes, usually so merry, contained the serious light that confirmed Gabriella’s suspicions. “His name is Julian Gath and he will need to learn how to love. On the dawn of your twenty-fifth birthday, you will come to a remembrance of your mission…”

Jessica L. Jackson lives with her English husband, two cats and a dog in Southern Alberta, Canada. She has three children. She’s been a member of the Alberta Romance Writers’ Association for three years and is currently standing for President. When not writing, she works as an Architectural Drafting Technician. Her favourite seasons are spring and fall. Jessica likes to camp, garden, cook, and listen to audiobooks while driving, working, doing the dishes, gardening, taking exercise and while waiting in the car for her family to come out of a store or their work.

Find out more about Jessica and her books:
~~~

Wow! Iran? That's cool. The most exotic place I've ever lived is Guelph, Ontario... (so, umm, not so exotic). How about you?

Congratulations Jessica. Your book is next on my list of to read. Good luck on your writing and it certainly sounds like you have fun writing.