Today I'm thrilled to announce the release of my latest contemporary romance book Chloe's Matchmaking Terrier! This book is a prequel novella to Devin's Second Chance, which was originally released in 2013.


So, help yourself to a virtual champagne
and scroll down to learn more about
Luke and Chloe's story! 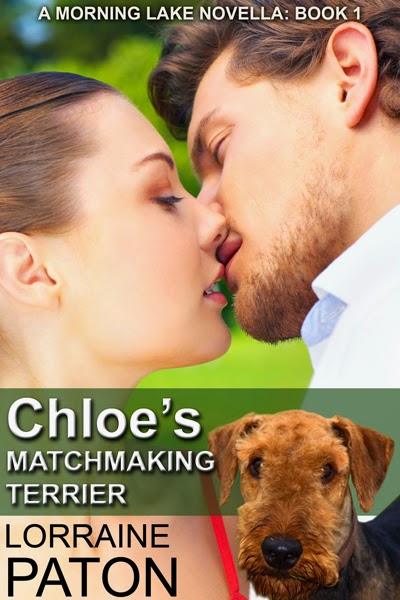 Blurb:
She is ready to leave her past behind.

Chloe Wagner, after leaving an unhealthy relationship, moves back to Morning Lake feeling lonely, fifty pounds overweight, and ready for a fresh start. So when a friend asks her to foster an Airedale Terrier named Ginger, she seizes the opportunity!

She hadn't realized her dog walk route would take her right by Luke Larsen's acreage.

Luke figures he's been in love with Chloe for most of his life. Even though she is only in town for the summer, he can't resist this opportunity to get to know her all over again. Is one summer enough to appease his heart? Or can he show her she's perfect ... and they're perfect for one another through every season?

~~~
This 18,000 word contemporary romance novella contains sexual content and adult language. Each Morning Lake book can be read as a stand-alone story.
~~~

"Thank you for staying with me. It would have been a long night otherwise." She didn't know why, but her voice was soft. Like a whisper. But why would she be whispering to Luke?
"You're welcome." Then his gaze drifted lower, over her face, until it landed on her mouth.
The impulse to kiss him kicked into gear again.
She opened her mouth. And he tightened his arms around her, pulling her closer to him. Body against body.
His lips brushed with tantalizing delicacy against hers. His hands spread over her back. When his fingers found a sliver of exposed skin at the hem of her shirt, he didn't stop. He drew enticing, teasing circles on that little bit of flesh.
Her hands gripped his strong back, fisting into the worn fabric of his shirt. Someone—it could have been her—moaned.
His tongue traced her lips and she opened wider for him. Man alive, he knew how to make a girl want more. The firm pressure of his hard chest against her breasts was so enticing. She wanted to escalate their embrace, by at least another bazillion notches.

~~~
(Note: This short novella is a prequel to Devin's Second Chance and was originally planned to be released as "Book 0.5". However, due to labeling challenges with some retailers, this book has been labeled as "Book 1" and Devin's Second Chance was shuffled up to "Book 2" and Annie's Christmas Plan to "Book 3" - Sorry for any confusion!)
~~~
Currently available in digital format at:
Amazon.com | Amazon.ca | Amazon.co.uk
Smashwords | GooglePlay | Kobo | All Romance eBooks

(As more retailers carry Chloe's Matchmaking Terrier, this list will be updated.)

Add it to your Goodreads wishlist.
~~~
Thank you for visiting!
I'm always here waiting to pour you another virtual champagne!
Cheers!
*Clink*
~~~

I hope you enjoy Luke and Chloe's story!

Congrats, Lorraine. I've been looking forward to reading this. I've already grabbed my copy from Amazon. I think the cover is adorable! :)